We previously demonstrated that insulin receptor substrate 2 (Irs2) KO mice develop diabetes associated with hepatic insulin resistance, lack of compensatory β cell hyperplasia, and leptin resistance. To more precisely determine the roles of Irs2 in β cells and the hypothalamus, we generated β cell–specific Irs2 KO and hypothalamus-specific Irs2 knockdown (βHT-IRS2) mice. Expression of Irs2 mRNA was reduced by approximately 90% in pancreatic islets and was markedly reduced in the arcuate nucleus of the hypothalamus. By contrast, Irs2 expression in liver, muscle, and adipose tissue of βHT-IRS2 mice was indistinguishable from that of control mice. The βHT-IRS2 mice displayed obesity and leptin resistance. At 4 weeks of age, the βHT-IRS2 mice showed normal insulin sensitivity, but at 8 and 12 weeks, they were insulin resistant with progressive obesity. Despite their normal insulin sensitivity at 8 weeks with caloric restriction, the βHT-IRS2 mice exhibited glucose intolerance and impaired glucose-induced insulin secretion. β Cell mass and β cell proliferation in the βHT-IRS2 mice were reduced significantly at 8 and 12 weeks but not at 10 days. Insulin secretion, normalized by cell number per islet, was significantly increased at high glucose concentrations in the βHT-IRS2 mice. We conclude that, in β cells and the hypothalamus, Irs2 is crucially involved in the regulation of β cell mass and leptin sensitivity. 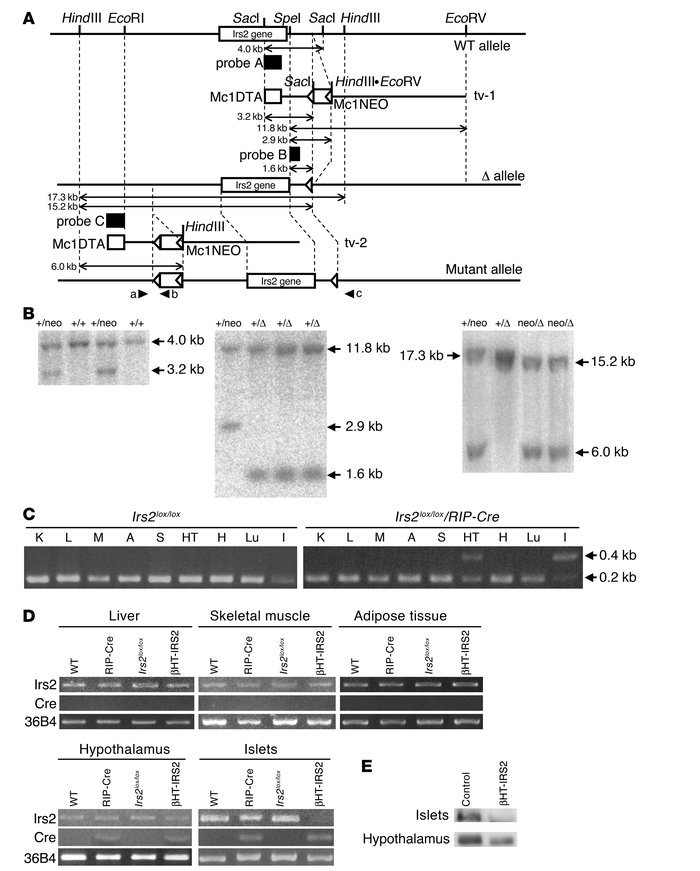