Vasopressin and its analogue 1-deamino-8-D-arginine vasopressin (DDAVP) are known to raise plasma von Willebrand factor (vWF) levels. DDAVP is used as a hemostatic agent for the treatment of von Willebrand’s disease. However, its cellular mechanisms of action have not been elucidated. DDAVP, a specific agonist for the vasopressin V2 receptor (V2R), exerts its antidiuretic effect via a rise in cAMP in kidney collecting ducts. We tested the hypothesis that DDAVP induces vWF secretion by binding to V2R and activating cAMP-mediated signaling in endothelial cells. vWF secretion from human umbilical vein endothelial cells (HUVECs) can be mediated by cAMP, but DDAVP is ineffective, presumably due to the absence of V2R. We report that DDAVP stimulates vWF secretion in a cAMP-dependent manner in HUVECs after transfection of the V2R. In addition, vasopressin and DDAVP induce vWF secretion in human lung microvascular endothelial cells (HMVEC-L). These cells (but not HUVECs) express endogenous V2R, as shown by RT-PCR. Vasopressin-induced vWF secretion is mimicked by DDAVP and inhibited by the selective V2R antagonist SR121463B. It is mediated by cAMP, since it is inhibited by the protein kinase A inhibitor Rp-8CPT-cAMPS. These results indicate that vasopressin induces cAMP-mediated vWF secretion by a direct effect on endothelial cells. They also demonstrate functional expression of V2R in endothelial cells, and provide a cellular mechanism for the hemostatic effects of DDAVP. 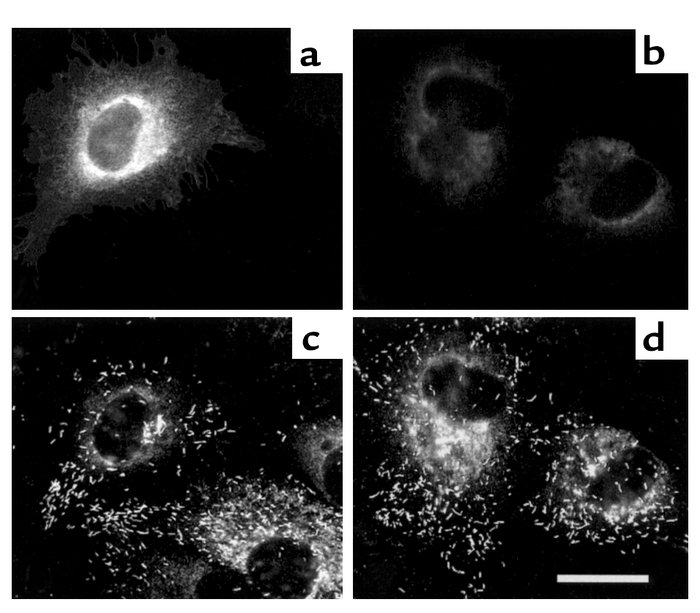 Expression of V2R.EGFP or A295.EGFP in HUVECs and immunofluorescence staining of the cells for vWF. HUVECs were transfected with pV2R.EGFP or pA295.EGFP. Twenty-four hours later they were fixed, permeabilized, and stained using anti-vWF antibodies followed by rhodamine-conjugated goat anti-rabbit antibodies. Images show EGFP fluorescence from HUVECs expressing V2R.EGFP () or A295.EGFP () and distribution of vWF in WP bodies in the same cells () and (), respectively. Membrane labeling with EGFP was seen only in cells expressing V2R.EGFP, whereas perinuclear labeling was seen with both constructs. Bar, 20 μm.